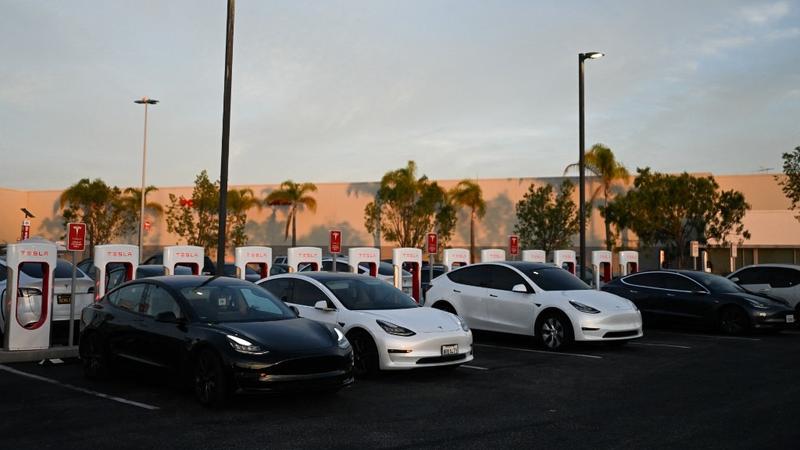 But virtually none of the cars on display, led by Hyundai's retro-boxy Ioniq 5, would qualify for a new US $7,500 tax credit for North American-built EVs – a sore spot for some leaders and ministers at the just-concluded G20 leaders summit.

The move angered foreign governments and foreign-owned carmakers who say the change will disqualify a majority of their EV fleets from North American markets. Previously all electric vehicles were eligible for the credit

Some US allies, notably from Europe and South Korea, used the gathering to make their displeasure known to President Joe Biden and his Treasury Secretary, Janet Yellen, over the restriction of the tax credit for EV purchases to those assembled in North America only.

The move angered foreign governments and foreign-owned carmakers who say the change will disqualify a majority of their EV fleets from North American markets. Previously all electric vehicles were eligible for the credit.

Biden's Inflation Reduction Act (IRA), which grants the tax credits, also aims to cement US firms such as Tesla and General Motors as industry leaders.

French Finance Minister Bruno Le Maire has said the revamped tax credits in the IRA are a "major shock" to the European industry and brought the issue up at a meeting with Yellen on the G20 summit sidelines.

Le Maire told reporters he hoped some solution to the problem could be defined, at least for European manufacturers, in time for French President Emmanuel Macron's planned US state visit to the White House in early December.

"I think that we can fully understand the determination of the American government to defend their economic interest and promote greener technologies," Le Maire said.

"But it should not have negative side effects on their European allies and the European economy."

European industry is already suffering from high energy prices caused by the Ukraine crisis and from weakening demand, and a US EV subsidy that excludes European products will heap further pain on Europe's automakers, he said.

South Korean President Yoon Suk-yeol also spoke to Biden about the issue during a bilateral meeting at the G20 summit, according to Yoon’s office.

Yoon asked Biden to prevent discriminatory measures against South Korean companies, his office said, adding that Biden had said the implementation of the law should account for the contribution of South Korean investment in the US economy.

The White House acknowledged the two leaders discussed the IRA without providing details in a briefing after the meeting.

Yellen acknowledged there were questions over how the law will be interpreted and said the administration was happy to hear more about the concerns raised by France and others.

"We stand ready within the limit of the law that Congress has passed, to work with them to address concerns to the extent we possibly can and also to explain ways in which the law will benefit them," Yellen told reporters.

The Treasury is working to define the rules for some $278 billion worth of tax credits on EVs, solar and wind power investments and a range of other technologies.

Foreign-owned automakers and governments are seeking delays, grace periods and exemptions from the tax credit rules as they are developed, particularly for North American mineral content requirements for EV batteries.

While a number of countries have said the US tax credits likely violate World Trade Organization rules, none have sought to file a formal challenge. US and EU officials last month announced a task force to discuss the issue.

WTO Director-General Ngozi Okonjo-Iweala told Reuters at the G20 summit that it would be far better to resolve the issue without bringing it to the WTO.

"Some members have said they have difficulties with this. The EU, Korea has said so," Okonjo-Iweala said in an interview.

"They are having bilateral talks, and we strongly encourage that. We think that one way to resolve disputes is to stop them from coming to WTO, to talk to each other and try to iron things out," Okonjo-Iweala said. Coronation of Britain’s King Charles to be held next May